Write On with T. A. Grey

Follow Write On with T. A. Grey on WordPress.com

This month marks the release of Tempting Gray (The Untouchables, #2). In honor of the sequel’s release, I am discounting Take Me down to $.99 for a limited time only. Now is the time to grab your copy! 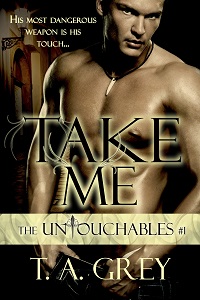 BUT SHE’S NOT HIS BRUID
The woman he’s mistaken as his bruid is none other than the event planner, Felicity Shaw, for his mating ceremony. Now Dominic will do everything it takes, even lie to the woman he craves, to keep her at his side. He needs to mate with his bruid in order to win his political campaign but he finds himself falling in love with Felicity Shaw. In the end he must choose between work or love. He may make the right decision, but is it too late to save his lies from hurting Felicity?

HE TAKES HER BREATH AWAY
Felicity Shaw wants more in life. She’ll even lie to get it, which is exactly how she lands a job with the illustrious Blackmoore family. However, it’s the head of the vampire household, Dominic Blackmoore, that has her heart racing and breath catching. The man consumes her unlike anyone ever has before. She can’t resist him though she tries. As she’s forced to work with Dominic she tries to keep away from him but he doesn’t make things easy. She may want him with a passion she’s never experienced before, but she will not be with him when he’s mating to another woman. It’s either her or no one. But one terrible lies seals their fates together in ways neither of them imagined, threatening their love and the very fabric of their relationship.

“This was a great read, filled with lots of twists and turns throughout the story.  You definitely stumble through an array of emotions throughout the read, especially surrounding Dom. You love him…you hate him…you want to slap him…then you just flat out WANT him…”~Close Encounters of the Night Kind

“I loved this steamy paranormal romance. This exciting new series is sure to appeal to paranormal readers. It definitely got me on the hook and eagerly awaiting the next offering in the series. I highly recommend this book.” ~Night Owl Reviews

The Kategan Alphas 6 is coming soon to your favorite ebook retailer!

Read the final installment to the sexy and fun Kategan Alphas series on July 27th at Amazon, Barnes and Noble, Smashwords, and All Romance eBooks. Also, be sure to check often, sometimes the book gets released early!

In the final installment to the Kategan Alphas series, Vanessa Kategan is a desperate woman. She’s got no job, no money, no place to go and to top it all off she’s on the run. That is, until she runs into the irritating, thought-consuming vampire Brayden. Now he’s forcing her to accept his help and she takes it even knowing her heart is on the line. The vampire can make her body burn one minute and her temper explode the next. Yet, she’s drawn to him like no other.

Brayden lives his life by codes. One of those codes is to protect others who can’t protect themselves. When Vanessa Kategan rolls into his town he can’t deny the urge to help her, nor can he keep his hands off of her. Soon, the walls are closing in on them. Time is running out, people are showing up dead, and Brayden’s not sure if he can keep Vanessa safe through it all.

Happy reading everyone! I hope you enjoy the last Kategan book!