Write On with T. A. Grey

Follow Write On with T. A. Grey on WordPress.com

I am posting this specifically for an internet friend of mine, Sir manbehindthecurtain.

I have this express need to show him, and you, dear readers, my latest book cover. This book cover is for the last book in the Bellum Sister’s trilogy that will be out some time in February called Ties That Bind. I think this cover is so beautiful and dark and lovely that I thought Sir manbehindthecurtain, and others, might enjoy it.

And if he does not read this post, then I shall send my ninja kittens in training after him!

Anyways, as for my current work Bonds of Fire, I have to post-pone the release date until early January. *ducks the rotten vegetables thrown at her* Yes, I know I am a horrible person but it seems that I forgot I was going on a vacation this month and will not be able to write. To make up for this, I have to push back the date. So sorry for all of you who’ve been patiently (or not so patiently) waiting for Bonds of Fire.

Now, back to what I was originally saying. All of the covers for this series have been done by Mae I Design. Each one I think accurately gives you a feel for the book, and the latest cover is no different. 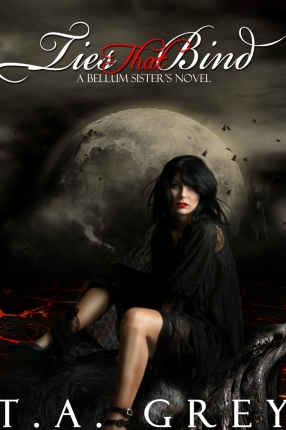 You can find the covers for all of the books in this series around my blog and my website. I hope you all check out my latest series, I’m incredibly proud of it. That’s all for today. I hope everyone has a wonderful holiday season!

-Sir manbehindthecurtain, do you like this cover or what?

Here is an excerpt from Bonds of Fire, the second book in the Bellum Sister’s trilogy, coming out in late December.  I also will be getting the final copy of the cover for the third book, and oh my, wait until you see this. It’s truly phenomenal! Check this out! Soon I shall be posting more blog posts on writing, more specifically, books on writing. I love to read and I love to write, so naturally I have a huge stack of books on writing. I will be posting about which ones have really helped me, which ones not so much, and so on! So stay tuned for that. =)

Willow knew he was close. God dammit. He couldn’t be on to her so soon. How did he track her so easily? She was supposed to be leaving a trail away from her not to her dammit.

The problem with trying to find a shapeshifter was that he could be in the form of a bird or a…guinea pig or something, and she’d never notice him. It was dark and she was somewhere on the outskirts of Leipzig, Germany on the east side.

She eyed the trees outside of town but didn’t see anything strange. Though now it wasn’t just a shapeshifter she was on the lookout for, but a monster that somehow knew her name.

She’d found the small bed-and-breakfast style hotel thanks to a local she asked at the train station. She looked forward to a hot shower and a clean, comfortable bed with stark longing. She would give up for favorite snow globes, her most precious ones left to her by her father, if only she could have a peaceful night. Alone. Without worry of monster demons or an Alpha chasing her.

The new moon was over and the new sliver of silver taunted her, laughed at her. It pointed bony fingers at her and all she could do was wallow in the constant needy tension reverberating throughout her body. What had he done to her? She was starved. Hadn’t been “fed” since he took her two days ago.

Already she was feeling the effects of it. First she thought she was just tired, but even after getting sleep, she realized she was just fatigued. Her body was shutting down slowly but surely.

A pebble rustled behind her. Willow spun around in a second. He was there. Every tall, muscled inch of him. His hand grabbed her throat, not in a threat but in a dominating gesture that probably made lesser women swoon. Good thing she wasn’t one of them. She wasn’t some submissive bitch from his pack. His hand was warm and gentle, stroking the skin at her neck.

“Let go of me you bastard.” His hair was just thick enough for her to grip in her hands, not that she ever would do that. It was a sandy blond color, somewhere between a light brown and dark blonde. “How did you catch me so soon?”

She realized that he looked angry and disheveled as if he’d been in a rush. His clothes were the same ones he’d worn when she last saw him. His shirt was wrinkled and several buttons were missing from it. He looked like a hot mess.

She couldn’t help it; she threw back her head and laughed at him. Before she could blink, his mouth came down hard on hers. She struggled, turned her face away, breathing hard. The lingering heat of his lips was already seared into her skin, her mind. Her body heated even more, remembering his touch from before.

He pulled her in close and she shivered at the hot press of his lips against her throat. His fingers caressed her skin, then wrapped around her back to curl against the nape of her neck. She was overwhelmed with his scent, couldn’t help but inhale the rich, animal scent of him into her lungs.

His tongue licked a rough path from her shoulder to the back of her neck like he was tasting her. Yet she wasn’t revolted in the least. Quite the opposite in fact. The fire that had been raging inside her ever since she met him, ever since she left him, was now having gasoline thrown on top of it–by the gallon.